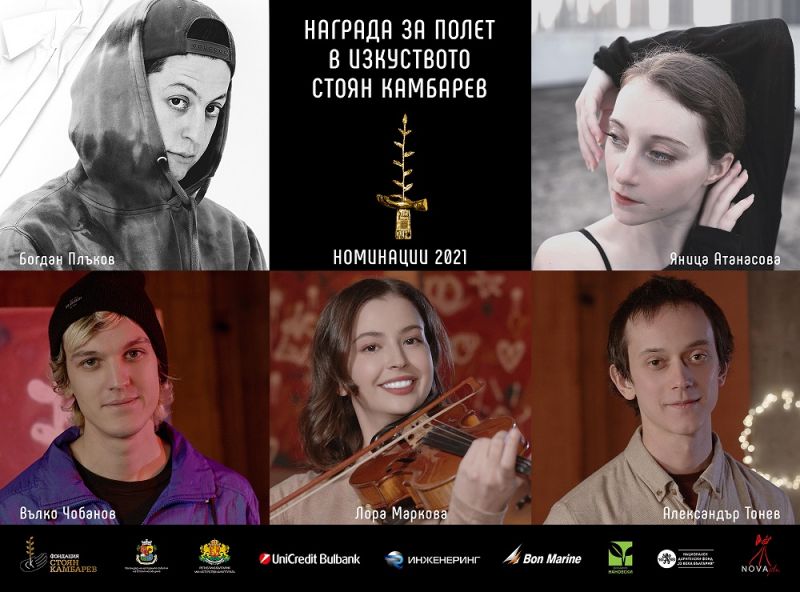 They are different, remarkable, original young artists who have already proven their talent in various fields of art. They are the five selected and nominated for the Award for Flight in Art “Stoyan Kambarev”.

In April, for the twelfth time in a row, the official ceremony for awarding the most prestigious and long-awaited prize for young artists in Bulgaria – that of the Stoyan Kambarev Foundation, and this year it will be very contested because of the incredible success of the nominees.

Here are the five nominated artists this year:

He lives and works in Milan. He is known for his strong auteur vision in his photographs of supermodels such as Naomi Campbell, Bella and Gigi Hadid, Kaya Gerber, Kendall Jenner and his creative work on videos of popular rap and hip-hop stars.

Publishes his photos on world-famous platforms. Bogdan was selected by the British Fashion Council Awards in the prestigious New Wave: Creatives selection at the ceremony at the Royal Albert Hall. He has been announced as one of “30 under 30” by Forbes Bulgaria.

Only 17 years old, Lora is the youngest concertmaster of a professional orchestra in Bulgaria – GENESIS ORCHESTRA of maestro Yordan Kamjalov.

Observed by the members of the Stoyan Kambarev Foundation since she was a child, she was nominated for her amazing talent, professionalism and determination, for her mastery, finesse and clearly expressed style in the construction of the musical phrase. Lora is a laureate and winner of an impressive number of awards from elite international competitions.

He was noticed for his extraordinary expressiveness and originality in his work on extremely current topics related to the digital image, internet culture, the natural-artificial relationship, the contrasts between the organic and the virtual. Valko is the winner of the prestigious award for young artists BASE.

Participates in a number of exhibitions and festivals at home and abroad. Unconventional and different as an artist and as a person. As if born on another planet …

She was nominated for her work as a choreographer and director of the original feature dance film “Obligatory Pleasant” co-authored with Tatiana Sokolova. Rhythm, movement and intellect are in Yanitsa’s blood. She works diligently and manages to touch and impress the audience with the international language of dance, which she has perfected to the smallest detail and gesture.

She has won world choreographic awards and is a lecturer in Contemporary Dance Techniques and Dance Theater at NBU.

The members of the Foundation noticed him as a student because of his role as Silyan in Goran Stefanovski’s “Black Hole”, and later as Nikola in “The Son” at the Ivan Vazov National Theater, Prince Mishkin in “The Idiot” in Sfumato, Treplyov in “Chaika” and Sancho Panza in “Don Quixote” at the Pazardzhik Theater.

He was nominated for his concentrated acting energy, for his organic and delicate presence on the stage and in front of the camera in the film “The Blessed” by director Stanimir Trifonov and in several short films.

The winner for 2021 and successor of the vlogger and film director Chris Zahariev, who won the Grand Prize in competition with four other young artists from different fields last year, will grab the bronze statuette of the artist Kolyo Karamfilov and a cash prize of BGN 3,000!

The most important thing is that all nominees will receive serious support for the implementation of their specific art projects.

Who will win the Flight in Art Award, named after the theater director Stoyan Kambarev, is determined by a jury, which includes members of the Foundation headed by the Chairman of the Board, actress and producer Desi Tenekedzhieva.

The ceremony for presenting the Annual Awards of the Stoyan Kambarev Foundation will take place on April 22 at JOY Station. It is then that the live audience for the third time will choose the winner of the CINEMA AWARD 355.

3 young film directors, selected by a prestigious international jury from Hollywood, Great Britain, Italy and Bulgaria, will shoot and edit a 5-minute feature film in just 5 days. The names of the finalists who will shoot their short films will be announced on March 11.

The winner will earn a statuette and BGN 10,000 for his next film.

Newer PostWildlings was the Most Watched Bulgarian Film of 2020
Older Post Exhibition “Manifestations of Abundance” March 4-28, 2021